PenzaNews. Experts continue to discuss the statement by US President Joseph Biden on the withdrawal of US troops from Afghanistan and the end of the era of major military operations to remake other countries. 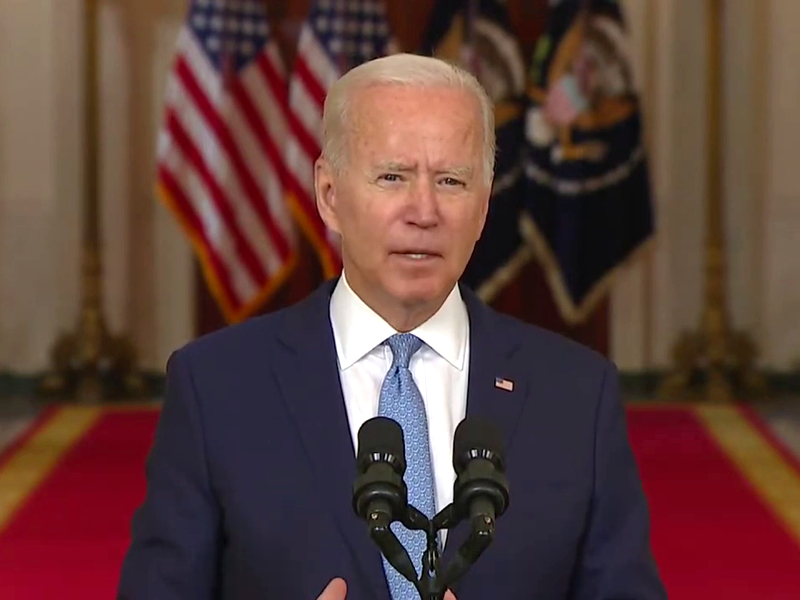 Photo: YouTube.com, CNBC Television
In his speech, the head of the White House noted that the country turns the page on the foreign policy that has guided the nation the last two decades, and said that the US has to learn lessons from its mistakes.

“To me, there are two that are paramount.  First, we must set missions with clear, achievable goals — not ones we’ll never reach. And second, we must stay clearly focused on the fundamental national security interest of the United States of America,” Joseph Biden said.

According to the American leader, moving on from that mindset and those kind of large-scale troop deployments will make the US stronger and more effective and safer at home.

“We’ve been a nation too long at war. If you’re 20 years old today, you have never known an America at peace,” Joseph Biden said.

Analyzing the statement of the head of the White House, Greg Thielmann, Board Member of the Arms Control Association and former office director in the State Department’s intelligence bureau, INR, who was specializing in political-military and intelligence issues, said that Biden’s statement reflects his long-standing scepticism about the ability of America’s military to remake countries like Afghanistan.

“However, one should recall that he was one of 77 Senators voting to authorize the use of military force against Iraq in October of 2002 and did little to press for reconsideration when evidence emerged prior to the 19 March 2003 invasion that Iraq had no active WMD programs,” the expert said.

In his opinion, it is likely that the Biden Administration will be less enthusiastic about nation-building overseas than some of his predecessors.

“But it is too early to predict with confidence how assertive the US will be to protect international law and human rights standards around the world. My expectation is that Biden will continue to sanction foreign countries for perceived violations of international standards, but will be more open to coordinating policies with US allies than President Trump and more willing to seek cooperation with competitors and adversaries in the pursuit of common interests, such as preventing climate change and nuclear war,” Greg Thielmann explained.

He also suggested that Biden is likely to prioritize his domestic agenda going into the fall, and a clear and coherent approach to foreign affairs and national security policy is unlikely to emerge until 2022.

In turn, Charles Henry, Professor Emeritus of African American Studies at the University of California at Berkeley, expressed the opinion that the US withdrawal from Afghanistan marks the end of 20 years of “nation-building” that began after 9/11 with the administration of George W. Bush.

“Obama’s attempts to do this were largely defeated by the military-industrial complex. Trump tried a kind of neo-isolationism but surrounded himself with generals and presided over an administration that was largely inept. Biden has sought to reestablish Western alliances and pivot US foreign policy toward threats from China and to a lesser extent Russia,” he said.

At the same time, according to him, the aggressive military approach remains very popular in the United States.

“Biden has also supported Congress reasserting its role in foreign policy making. His foreign policy initiatives have divided both parties. There are significant voices among both Republicans and Democrats that favor an aggressive military approach as witnessed in the recent Congressional authorization of over $700 million more in spending for the Pentagon over Biden’s request,” the expert added.

Meanwhile, Steven Pifer, US Ambassador to Ukraine in 1998–2000, ex-Deputy Assistant Secretary of State in the Bureau of European and Eurasian Affairs, expert at Center for International Security and Cooperation, Stanford University, stressed it has been known for years that Joseph Biden believed the United States should end its military involvement in Afghanistan.

“[One of the] factors that appears to have affected President Biden’s decision is the administration’s conclusion that the main security challenge facing the United States today is no longer international terrorism, which was the number one threat for most of the post-9/11 period,” Steven Pifer suggested.

“Peer competitors – China and Russia – are now seen as the primary challenges,” he said.

“Biden is assuring Americans that he does not plan to pursue a policy of forcible nation-building after the failures in Iraq and Afghanistan. In fact that era has been over for about a decade. No US president could get support from either the Congress or the US public today to start a long-term occupation of a defeated enemy country,” he explained.

Nevertheless, in his opinion, Biden still appears committed to the objective of the United States remaining the world’s strongest and most influential country.

“Biden is rejuvenating US alliances, trying to restore US global leadership, and seeking to strengthen America’s economic and technological base. American post-Cold War unipolar over-confidence has peaked and passed. But the USA still aspires to global primacy, and will continue under Biden’s government to sponsor and defend an international system based on liberal Anglo-American norms,” Denny Roy said.

Meanwhile, Michael O’Hanlon, Senior Fellow at Brookings Institution and an author of several publications for the National Interest magazine, expressed disagreement with some of the statements of the American leader.

“I don’t really agree with President Biden’s quote. We didn’t decide to “remake” Afghanistan. We tried a minimalist approach in the years after 2001 and it didn’t work. The country didn’t advance much, corruption got worse, and the Taliban began to return. So that’s when we tried something more comprehensive.  It didn’t work very well either—but what really didn’t work was Biden deciding to give up on the mission this past April. Those are my observations. Fortunately, most of the rest of US foreign policy is unaffected, I think,” the analyst said.

In turn, Frank von Hippel, Senior Research Physicist at Princeton University, who served the Assistant Director for National Security in the White House Office of Science and Technology Policy, said that his main concern is the US relationship with China.

“Biden has also said that the main challenge to the US is not the problems of the Middle East but the rise of an aggressive China. I worry the US is embarking on a new Cold War with China. In this Cold War, Taiwan could be the nuclear flash point as West Berlin was in the Cold War with the Soviet Union,” the expert explained.

Commenting on the changes in the US foreign policy strategy, Frank von Hippel recalled that at the end of the Cold War with the USSR, the United States saw democracy as the wave of the future, but under Donald Trump, the Republican Party has turned its back on it.

“Authoritarianism has been on the rise in other countries as well – and the structures of international cooperation are weakening at a time when we need global responses to global challenges such as climate change and COVID-19. I hope the pendulum will begin to swing the other way soon,” the expert concluded.